With dual boot, you can switch from one operating system to another to enjoy all the available features. But, are there any good dual OS tablets out there? Should you buy such a device?

Why do you need a dual OS tablet?

If your tablet has two operating systems, you can switch between them anytime from the system panel. Usually, you have to reboot the device to do it.

The most common combination is Android and Windows. Why are they combined? Android has a clear interface and access to Google services, such as the Play Store, which Windows does not. But unlike Android OS, Windows allows you to use desktop programs such as Photoshop.

If you want to know more about the differences between the two OSes, read my article-comparing Windows vs Android.

With dual boot tablet, you can use all the features with one device. For example, when you need to work, you can switch to Windows; when you want to play games, you go back to Android.

The idea of creating a dual boot tablet may appeal to many. But for some reason, the leading tablet manufacturers don’t want to create such devices (probably, it is not profitable). Only Microsoft has recently created some kind of such tablet – Surface Duo, my favorite.

The rest of the options on the market are Chinese devices from manufacturers like CHUWI. These are really dual OS tablets, but they are pretty weak and hard to find on sale. Nevertheless, I will talk about them as well.

So let’s start with the Surface Duo. 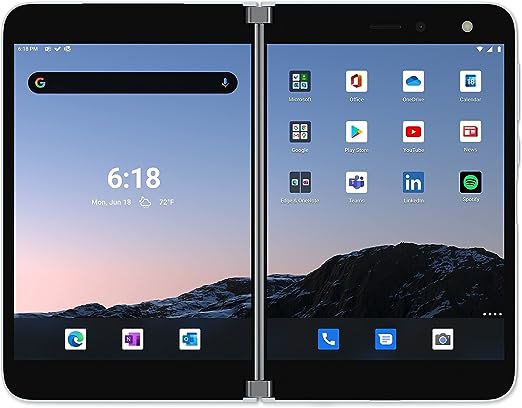 Buy Now on Amazon
We earn a commission if you make a purchase, at no additional cost to you.

This tablet does not have two operating systems. Its main OS is Windows. The Surface Duo comes pre-installed with programs like Microsoft Office, Edge, Outlook, etc. But this time, Microsoft has added programs from google such as:

So, you can use Android and Windows apps, and you don’t have to switch between the two operating systems. It is a unique device at the moment, and you won’t find such a feature in others!

But the Surface Duo is actually a smartphone that can be turned into a tablet. Its screen folds out, and you can use it as one large screen or as two separate screens to perform several tasks simultaneously (for example, to type on one and view the text on the other).

But I know that not everyone likes this feature. Some people think the Surface Duo is uncomfortable. It is thick when folded and not so big when unfolded; in addition, the line in the middle interferes with the enjoyment of the picture. But I am impressed by this device, and it has a lot of fans.

In addition, it is quite powerful. The Qualcomm® Snapdragon™ 855 processor and 6GB of RAM make it fast, even when using multiple apps at once. The Surface Duo has many more “pluses” that you could write a separate review about.

Conclusions: If you want to buy a tablet that combines Windows and Android features, I recommend choosing this model. The Surface Duo is powerful enough to handle any task. The other tablets on this list are no match for the Surface Duo. After all, Microsoft knows a lot about creating quality devices.

It is a dual boot tablet with Windows 10 + Android OS. CHUWI is one of the worthy Chinese electronics companies. They sell not only tablets but also phones and laptops at bargain prices. Of course, they can not be equated to Microsoft, but the price is much lower.

CHUWI Hi10 Pro is not new, so its specs are not so impressive. It has a Quad Core 1.44GHz, up to 1.92GHz and Intel HD Graphic Gen8 GPU. CHUWI has 4GB of RAM as well as 64GB of SSD, which is very small for a modern device.

The tablet has two cameras, but their quality is not worth discussing. Good cameras do not distinguish tablets, in general, and the Chinese even more.

As I said, CHUWI Hi10 is challenging to find on sale. I will update this list if there are any new models with two operating systems.

Conclusions: If you’re a fan of Chinese tablets, then you should like the CHUWI. It will be suitable for basic tasks such as internet surfing and social networking, watching videos and playing simple games. But do not expect too much from the cheap Chinese dual OS tablet. You need a more powerful device for complex tasks, work, or the latest games.

This older dual OS tablet is currently off the market, but it still remains in reviews of dual operating system tablets. It originally came with two operating systems, Windows 8.1 and Android 4.4, but they should update to newer versions.

The PIPO is relatively weak by today’s standards. It only has 2GB of RAM and a Quad Core Max 1.8GHz. It also has little internal storage – 32 GB. It is reasonable to buy such a device only for the simplest actions, such as taking notes or watching movies.

Nevertheless, it is very cheap so it may suit someone as a budget gadget.

Conclusions: what is the best dual OS tablet

At the moment, only Chinese manufacturers can offer dual boot OS tablets. Among them, there are decent models, but they are still pretty weak devices. Perhaps companies like Microsoft or Samsung will release something more worthy in the future.

For now, I recommend choosing the Microsoft Surface Duo. Although it doesn’t have two operating systems, it combines Windows and Android features. It is a powerful device that can handle a variety of tasks.